Villamblard is more than 2000 years of history as evidenced by place names such as “Peyrelevade” or “Peyrebise”. They show human occupation since prehistoric times.Remains of Roman tiles and pottery found near the village are the signs of a Gallo-Roman settlements.

Amblard, that name of Germanic origin was fashionable in Roman times. Until the late eighteenth century, Villamblard was an important market town, main stage halfway on the road from Bergerac to Perigueux. Note the imortant barrier castle ruins that stand at one end of town (from the twelfth to seventeenth century). it is in these places was born Wlgrin Count Taillefer in 1761, history buff, he installed his “antique

cabinet.” He was one of the first archaeologists in the region and devoted his life to the preservation of heritage and restoring the honor of Périgord too often forgotten by historians. In 1824, he published “antiques Vésone” study of the Roman city of Perigueux, which he allowed the backup. 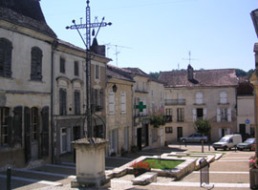 The arms of Villamblard  golden mouths to the fascia with six azure lilies: three in chief and three in base